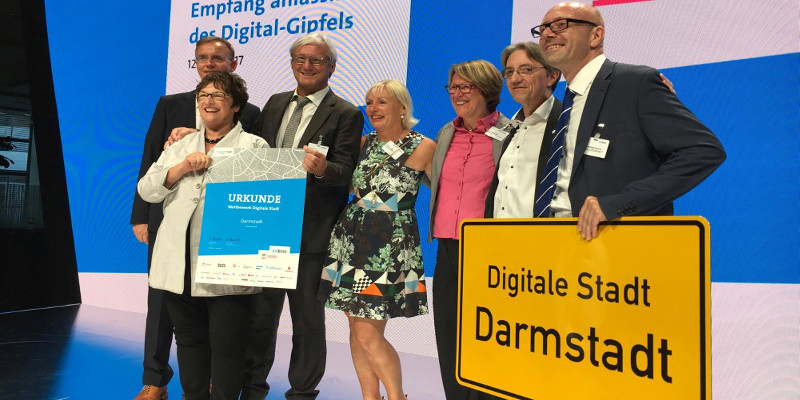 Darmstadt is the winner of the national competition “Digital City” and becomes digital model city. [ui!] was significantly involved, together with over 20 companies, in shaping Darmstadt’s application.
Berlin, 13 June 2017. Out of 14 cities and 5 finalists, the city of Darmstadt convinced the judges in the final the national competition “Digital City”. The award was handed over by German Federal Minister of Economics, Brigitte Zypries. Darmstadt will continue to become a digital model city. From 2018 on, sectors like traffic and energy will be provided with latest digital technology. Public administration will offer innovative online application and commerce intelligent delivery services.

[ui!] played a vital part in supporting Darmstadt’s application with their know how from on-going projects in Darmstadt, like the [ui!] TRAFFIC app (https://darmstadt.ui-traffic.de), which offers real-time information on the traffic density in Darmstadt and is powered by [ui!] Urban Pulse, [ui!]‘s IoT data platform.

Together [ui!] and the other companies involved in Darmstadt’s successful application, committed to over 20 Million Euro pro bono contributions for the realisation of Darmstadt as a “Digital City”.

“These investments will make the city more attractive for other companies and cause follow-on investments. Other cities will learn from Darmstadt’s developments, which sets an important impulse for the digital transformation of German cities and municipalities”, says Bitkom CEO Bernhard Rohleder.

The competition “Digital City” was organised by the German Federal Association for Information Technology “bitkom” and the German Association of Towns and Municipalities. They invited German middle seized cities with 100.000 to 150.000 inhabitants to apply. The other finalists were Heidelberg, Kaiserslauern, Paderborn and Wolfsburg.