The concept of smart cities will redefine how we live in the cities of the future. It is estimated that by 2050, around 70 percent of the population across the globe is going to live in urban areas. Designing and implementing smart cities will be important to tackle the economic, environmental, financial
and technical constraints that will accompany this growing population in urban environments.

Today’s smart city solutions—built and implemented by IT solutions providers—are enhancing the entire concept at a micro level. However, it has to be  done in a bigger and broader scale to facilitate smart cities with smart infrastructure. IoT and cloud will be key enablers in this. These solutions will help tackle multiple challenges, such as reducing air, water and noise pollution, energy conservation, operational savings, public safety, appropriate resource management, improved health and enhanced security. The rapid growth of technology will make the dream of fully integrated smart cities real in the
near future.

In order to assist CIOs and other stakeholders in identifying the right smart city solutions providers, CIO Review presents “20 Most Promising Smart City Solutions Providers 2016.” A distinguished panel comprising CEOs, CIOs, VCs, analysts, and the CIO Review editorial board has selected the top Smart  City Solution Providers. In our selection process, we looked at the vendor’s capability to fulfill the need for cost-effective and flexible solutions that add
value to the smart city landscape.

Plummeting resources, choking pollution, long traffic jams, and ineffective governance are the verticals of
our cities today. The concept of “smart cities” that was conceived as a part of IBMs’ Smarter Planet initiative in 2008 could hold the key to reverse this phenomenon. Many nations are progressively experimenting with this concept to create cities with efficient resources usage, sustainable economic development and readily available essential services. Urban Integrated, part of The Urban Institute group based in Germany, entered the U.S. in mid
2014 aiming to help cities manage their resources efficiently and embrace the concept of smart city. 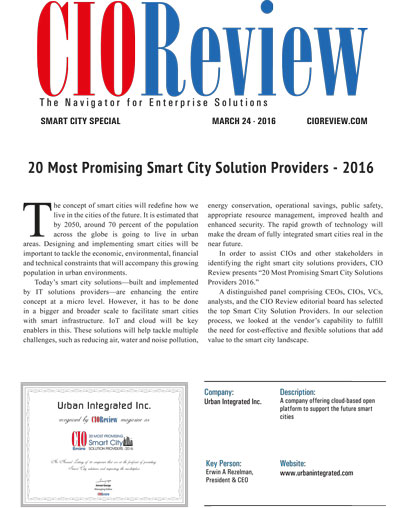 Passing of a European law for cities to comply with environmental standards such as reduction in carbon footprint and increased use of renewable
energy has roughly translated as a backdrop for “smart cities”. “However in the US, this space is a bit different; there’s no such uniform law” informs Erwin Rezelman, President & CEO, Urban Integrated Inc. Nonetheless, cities in the U.S. face similar challenges-congestion, traffic, energy, pollution. The modus operandi of the company is to start with the problem, analyzing its metrics and then working backwards towards the solution.UrbanPulse, the solution rolled out by Urban Integrated is a cloud-based open platform that runs on Microsoft Azure.

“UrbanPulse is about providing the pulse of the city; pulse of the streets, of transportations, of environmental readings” explains Rezelman. The platform integrates data streams from a wide array of sensors and generates data capable of providing predictive as well as real-time analytics. UrbanPulse’s
diversified deployment makes it a solution truly meant for smart cities; it could be a dashboard that a city management avails in order to manage their city, it could be information for the citizens to lead a superior life or could be data for businessesto make important decisions. The concept of smart cities, albeit reminiscent of sci-fi, is however, possible leveraging current technology arsenal such as IOT and Cloud.

Germany, where nuclear power plants are shutting down by 2018 is expected to lose about 40 percent of its power supply. Urban Integrated, working with the local utility company in Saarbrücken created the “holon” i.e. a district within a city less dependent on the power grid. The strategy was to increase power generation through solar panels installed in homes based on a peer-to-peer energy sharing model; households could buy
or sell excess energy generated within the district. This significantly reduced the burden on power grid and increased resilience. This eliminated investments of millions for creating new gas turbines and also enabled energy requirement predictions with approximately 98 percent accuracy. The company considers a similar approach for the U.S. which could facilitate cities to function smoothly with more population pouring in.

It’s not technology that makes a city smart, but the availability of information to the users in a useable package

The Open platform is an edge that distinguishes the company from its counterparts. The solution’s Cloud base makes it ubiquitous and available at a
fraction of the cost compared to establishing infrastructure that performs the same tasks. The company holds an agonistic view regarding the source of data or provider of technology which places them well within a “smart” setup. Commercializing of the data streams is where Urban Integrated is helping cities offer a better service and gain a new, non-tax based, revenue stream. “In effect we become data brokers”, said Rezelman. Expanding their presence in the U.S. cities, the company is currently in talks with a towns in Silicon Valley, on integrating traffic, parking and environmental sensors. The company’s expertise gained through successful project implementations in 12 European cities can very likely work towards helping the US cities sustain life in a symbiotic manner.